Posted at 11:22h in Movies, Reviews by FlixFling
0 Likes
Share 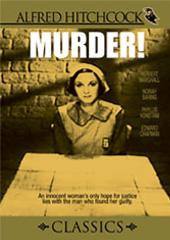 Alfred Hitchcock’s Murder! is an example of all the pieces fitting together, but the completed puzzle is still a little lopsided.  The film is about a young aspiring actress who is caught red-handed standing over the murdered body of her rival.  She is whisked off to prison and promptly sentenced to death.  After the verdict is passed, one juror, an actor himself, reconsiders his vote and goes in search for the truth.

Sir John, the actor turned detective, walks into the eccentric, somewhat provincial world of the small theater troupe to which the victim and convicted belonged.  Everyone in the troupe is truly a character, including the overzealous stage manager and the high-strung drag queen, which= humorously takes Sir John aback.  That said, the most humorous scene is that in which the jury is deciding the young actress’s fate.  While one misunderstands simple explanations, another deems that such a pretty girl could never have done such an ugly thing.  Then, while Sir John holds out, the rest of the jury stands over him like a Greek chorus nudging him towards ‘guilty.’

The most interesting thing about Murder! is its meta quality.  Much of the film takes place backstage or in the wings of a stage.  Characters are interviewed while waiting for their cues or changing costumes.  It makes for some very funny sequences.

On paper this sounds like an awesome film.  In actuality, it was very good, but was just a bit too slow to be really exciting.  It keeps you watching until the very end, but not at the edge of your seat, which is what you expect from a Hitchcock film.  All in all, don’t pass Murder! up because there are some great moments in there; but you may consider leaving it until you’ve exhausted your other Hitchcock’s.