17 Aug Review – In The Land Of Milk And Money

Posted at 13:15h in Movies, Reviews by FlixFling
0 Likes
Share 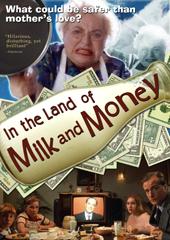 FlixFling contributor, Jordana Lipsitz reviews In The Land Of Milk And Money

There is a pretty real truth in this world that most people ignore and that is that milk is really, really disgusting. On the Richter Gross Scale it’s a level 7.8. That’s a thing. Look it up.  So it stands to reason that In the Land of Milk and Money (2004) would also be a strangely gross flick.  And indeed, this proved to be very true in the best possible way.

We first learn how gross this movie is going to be in the very beginning, when a seemingly innocent old man, Mr. Brand (Keith Mills) drinks milk in an incredibly secretive way and then slowly passes it off. It doesn’t stop being uncomfortable and icky after that. Any movie where a scientist creates ‘milk’ that makes mothers sweat milk and then try to kill their young automatically enters into yucktown. We follow this sick-tastic film through the characters of Dr. Peter Cochran (Chris Coulson) and Laurie Shallot (Kim Gillingham). The estranged soon-to-be-parents attempt to save the day by giving anti-venom to all the infected mothers, but the evil Mr. Brand is out to stop them to reap the profits of an economy without mothers.

An extra addition to Team Ughhhhh was the color scheme of the film and the creepy close-ups.  In the Land of Milk and Money did a great job of showing the ridiculous and sometimes unappealing nature of suburban life.  The scenes with a poisoned mother or an evil corporation had a mise en scene of bright jarring colors.  Meanwhile, the camera utilized close-ups of the characters in an incredibly unsettling way.

As is the case in many independent films, the acting was….lacking. I got that the characters were supposed to be melodramatic but there is a line and they did their darndest to cross it.  Chris Coulson did an ok job of being a doctor out to save the world, but I could not get over how much he looked like Bill Murray. I am not convinced that he is not Billy Murray and is just playing a practical joke on the world. Meanwhile, our pregnant Laurie Shallot left something to be desired.  If the way she expressed anger is how people usually do it, I’m doing something very wrong.

If you don’t really like milk, are lactose intolerant, or just want to cut out animal byproducts from your diet, In the Land of Milk and Money is your girl.  Just don’t forget that cheese is also a dairy product.