Posted at 09:41h in Movies, Reviews by FlixFling
0 Likes
Share 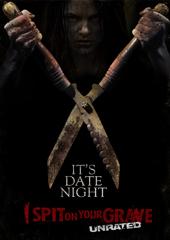 FlixFling contributor, Matt Bussy reviews I Spit On Your Grave

I Spit on Your Grave just wants to be hated. It’s like The Human Centipede. Who wants to watch three people cry and scream for a whole movie because they’ve just been sewn anus to mouth? In this case it’s: who wants to watch an innocent woman get assaulted and gang raped by a bunch of sadists and then watch her get revenge on them? I wouldn’t mind watching the revenge part. It’s the first hour of the movie that made me feel like a misogynist. Why would I want to watch a woman scream and cry and get raped a bunch of times? It’s horrible! Why did I let myself put this movie on?! There’s nothing wrong with a movie being very hard to watch. There’s a scene in Boys Don’t Cry where Hilary Swank’s character is beaten up, humiliated, and then raped by two men. Yes this is horrible, but it’s necessary. This brutality isn’t necessary just because it’s based on a true story. It’s necessary for the story, and it doesn’t feel misogynistic at all. All of Martin Scorsese’s gangster pictures are brutal as hell but it’s all necessary because, well, gangsters are violent people! This is never the case with I Spit on Your Grave.

Everything feels exploitative, vile, and offensive here. The movie is a remake of a VERY controversial (surprise?) 1978 film of the same name (though it was originally called Day of the Woman). That movie was banned in many countries and hated by the majority of critics, including the legendary Roger Ebert, who awarded it zero out of four stars. So for some unknown reason Hollywood chose to remake an already bad movie in 2010. It got an NC-17 rating but was released unrated because they believed that more people would check it out. This is ridiculous though because an unrated movie is pretty much the exact same as an NC-17. Ebert also gave this remake zero stars, calling it a misogynistic piece of trash. One thing’s for sure, I won’t be watching the original I Spit on Your Grave any time soon.

So in the movie Jennifer (Sarah Butler), an attractive young writer, rents a creepy cabin in the middle of the woods so she can work on her next book. Right away this woman is an idiot. Why in God’s name would you let yourself rent a cabin by yourself in the middle of nowhere? I’m a guy and I’d never do this. So she goes to a gas station one day and the three guys working there hit on her. She ignores them and comes back home to discover her bathroom sink and toilet aren’t working. She calls a guy over (Chad Lindberg) who happens to be mentally retarded. He goes back to his friends (who just happen to be the same ones from the gas station) and they convince him that he should lose his virginity to her. They break into her house at night and force her to do awful things like suck on a bottle and a gun. She manages to escape and runs into Sheriff Storch (Andrew Howard). She explains what happens and he takes her back to the house to investigate. Once again she’s an idiot. After what happened to her don’t you think she’d want to stay at a police station than her own house? The sheriff turns out to be friends with the guys and together they strip her, rape her, stick her head in a puddle of mud, and then rape her some more. She escapes and the guys leave her for dead. Pretty soon though Jennifer comes back and seeks revenge on her rapists.

The movie reminded me of an equally controversial rape/revenge movie, The Last House on the Left. In that movie a teenage girl is raped by a group of sadists and then shot and thrown in a lake. The people stay at a couple’s house that night, not knowing that the girl they killed is the couple’s daughter. The parents find out what their guests did and get revenge on them. As hard as it is to watch I never felt offended when I saw it for the first time. It says a lot about the human condition and violence in society in general. When violence is brought on somebody only more violence will occur as a result. This could have easily been the case with I Spit on Your Grave, but it can’t help but come off as a grotesque, exploitative snuff film. Why does the first hour have to be committed to Jennifer getting physically abused? It’s not necessary. If the movie had just used momentary flashbacks of her assault then it might not have felt so offensive.

The scenes where Jennifer gets revenge on her rapists aren’t as offensive as watching her get raped, but they’re just plain gross. Example # 1: Jennifer cuts off the penis of one of the rapists and then shoves it in his mouth. Example # 2: Jennifer takes out two fishing hooks and sticks them through the eyes of another rapist so that he can’t close his eyes. Oh yeah, and then she takes out some fish guts, smudges them over his eye sockets, and lets crows land on his face and peck at his eyeballs. Yes, these rapists deserve everything that happens to them. Sometimes in the back of my head I went “YES. Kill that evil rapist.” Yet once again, why does this all have to be so grotesque? It’s okay to make a brutal movie like Boys Don’t Cry or The Last House on the Left, but there has to be some intriguing statement to it all. In I Spit on Your Grave the statement seems to be “If you get raped, get revenge and be even meaner than your rapists!”