Posted at 09:12h in Movies, Reviews by FlixFling
0 Likes
Share 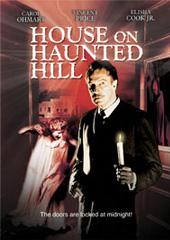 Take my word for it: House on Haunted Hill won’t scare you. It should certainly entertain you though, that is, if you’re a big fan of utterly campy, old black and white horror films. You might be thinking of the silly 1999 remake with Geoffrey Rush, Taye Diggs, and Ali Larter. This is the original one starring Vincent Price, the famous horror film actor who also starred in classics like House of Wax (no, not the one with Paris Hilton) and The Fly. He plays Frederick Loren, a millionaire who invites five people to a big haunted house. The catch? If they make it through the night and don’t get killed by the ghosts then he will give each of them $10,000. The guests include Frederick’s unhappy wife, Annabelle (Carol Ohmart), sweet Nora (Carolyn Craig), possible love interest Lance (Richard Long), Dr. Trent (Alan Marshall), Ruth (Julie Mitchum), and superstitious Watson (Elisha Cook), whose brother died in the house. Spooky stuff happens, of course, and though it’s more hilarious than spooky it’s still a joy to watch.

So what’s silly about it? Well, for starters, there’s a scene where Frederick hands each of his guests a .45 caliber for their protection. Protection?! How will a gun protect you from ghosts? In one iconic scene Nora (who has a pretty impressive scream in the movie, I might add) gets up from the ground and sees a creepy woman standing next to her making a scary face with her arms up a la Frankenstein. She then drifts off out of the room like she’s on a skateboard. I saw this scene when I was 8 and it terrified me. When I watch it now it just makes me laugh. There’s also a scene involving a skeleton near the end of the movie that I won’t even begin bothering to explain because it’s so ridiculous. As stupid as it may look it’s so much fun to watch a movie have fun with its haunted house genre conventions. Director William Castle has fun with everything here: Nora screaming, doors opening by themselves, Frederick and Watson looking at the camera to address the audience and say cheesy lines like “You’re gonna die in this house!” When it was released in 1959 Castle sometimes attached a plastic skeleton to a wire next to the screen in theaters and would release it so the skeleton would fly over the audience. The film is everything a B-movie should be.

I also never expected there to be so many plot twists in the story. I have seen the remake and though the story is the same I just assumed the remake had a new story because that’s what a lot of horror remakes do. The plot twists are clever but a little disappointing in that (SPOILER ALERT!!!!!) they somewhat prove that the house isn’t as haunted as we think it is. Price’s unforgettable performance as Frederick, however, handles the twists realistically enough for us to appreciate. I did some research on the film and found out that it was actually a huge success at the time of its release. It made a decent amount of money and its low budget influenced Alfred Hitchcock to make Psycho a year later. To be honest, I think if House on Haunted Hill was released this year it would still be a success because of how cheerfully campy it is.