Posted at 13:06h in Movies, Reviews by FlixFling
0 Likes
Share 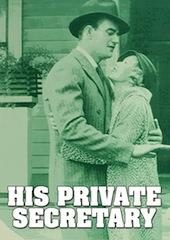 On one hand, I like old movies and John Wayne. On the other hand, His Private Secretary (1933) is a really bad movie. There was honestly very little appeal to it. The movie had pretty mediocre production quality and the story line was pretty, I’m just going to say…meh. I was unimpressed and mostly bored.   I can’t quite put my finger on why exactly I didn’t like it.  But I’m pretty sure it was warranted.

His Private Secretary is completely different from every John Wayne movie I have ever seen. It is the story of a dashing young playboy, Dick Wallace (John Wayne) who falls in love with a young lass named Marion Hall (Evelyn Hall). At first, she’s worried he’s a jerk because she’s just a plain, good-natured preacher’s daughter, and then she realizes his full potential. But wait, there’s more! Then his father refuses to accept that she’s good enough for his business tycoon son. But, she becomes his secretary and changes Daddy’s mind with her plain, good-natured preacher’s daughter ways.

Hands down, John Wayne made this movie OK. It was very interesting seeing the typically grizzled cowboy actor play a rich playboy.  He managed to play it off very nicely, most likely because his real personality was in actuality more like a millionaire playboy than a cowboy. Despite his cowboy swag, Wayne didn’t like horses so he seems much more in place in a suit to me. He seems so much more suave. It’s a good way to watch John Wayne.

I know that old movies have longer takes and less camera movement, but I was so bored with the lack of action in the film that I simply couldn’t look past it. There were wipes, and not enough movement. Occasionally the camera would pan as an actor walked, but for the most part the film was just static and boring. I may have almost fallen asleep several times. It was only that old movie crinkling noise that kept me going. What is that noise and why is it always in movies? It sounds like a record player and I love it.

The sixty-minute length of a movie also did not do it for me.  I enjoy a shorter film, but sixty minutes runtime is not my cup of tea. I know that’s knit-picky and I’m sorry, but I feel like the story doesn’t have enough time to develop.  The parts of the film are not as well defined and are therefore less interesting. However, maybe it was better this way, because that movie was boring. Sorry, ghost of John Wayne.