Posted at 12:52h in Movies, Reviews by FlixFling
0 Likes
Share 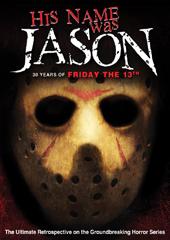 Jason Voorhees has had a pretty rough life. He’s appeared onscreen over twelve times. He’s been killed and then brought back to life in every way UNhumanly possible. He’s been sent to outer space. He’s battled Freddy Krueger. And obviously, he’s killed A LOT of people in every way possible. In addition many of the women that he’s killed are topless at the time of their deaths. Friday the 13th became an instant classic when it hit theaters in 1980. The slasher genre had already been created two years prior with Halloween but this was the first time that gore was introduced into it (it was also the first time that Kevin Bacon had appeared in a movie). The stiff performances and utter cheesiness of the film also greatly increased the conventions of the genre. Loads and loads of slasher pics came out after its release and were just like this one; bad actors, gory over-the-top deaths, sex and nudity, a character hears a noise so he goes to check but there’s nothing there and then turns around and is killed, a chaste heroine who is left alive and has to battle Jason, etc. To this day the movie is still showed at midnight screenings with a huge audience of fans. The picture starts and the audience cheers, laughs, screams, and just has a really fun time. It’s official: Friday the 13th will always be remembered as a cinematic classic.

His Name Was Jason: 30 Years of Friday the 13th is an entertaining documentary about the history of the series. It came out in 2009 as a way to excite the fans for the upcoming remake that was coming out later that year. It’s hosted by Tom Savini, who’s recognizable for starring in Quentin Tarantino/Robert Rodriguez movies like From Dusk Till Dawn, Grindhouse: Planet Terror, Machete, and Tarantino’s upcoming western Django Unchained. He’s perhaps better known for his work as a special effects and makeup artist and has done the makeup for classics like Friday the 13th, Dawn of the Dead, Creepshow, and Martin. The documentary starts off explaining each and every movie of the series. We learn about how Jason drowned at Camp Crystal Lake as a child because the counselors were busy having sex. This then caused his mother to seek revenge for her son by killing everybody in the first movie. Jason sees her get decapitated and then gets so vengeful he becomes a hockey-mask-wearing, machete-carrying maniac for the rest of the series. There are many interviews with the directors and actors of the whole series. The funny thing is that even though none of the actors and directors are well-known they seem like the most normal people in the world. They discuss funny stories from the set and how it was like filming their death scenes. For example, one woman’s death scene took place in freezing cold water and she actually got hypothermia as a result. His Name Was Jason is pretty much a made-for-TV special on the history of the franchise that could have easily aired on the Biography Channel (for starters it wasn’t even released in theaters), but it features enough trivia facts that you’ll become a Friday the 13th genius by the end.

To be honest, Jason’s never been my favorite killer. Leatherface has always been my favorite because he’s always scared me the most! Nevertheless there were facts in His Name Was Jason that made me appreciate the killer more. I never realized, exactly, that Jason is killing for a purpose. Freddy Krueger and Michael Myers kill for one reason only: they’re evil. Jason, on the other hand, doesn’t exactly mean to kill. He’s just a very sick man that’s traumatized by drowning and seeing his mother’s head get chopped off. There’s a clever interview with Betsy Palmer, who played Mrs. Voorhees in the first movie. She said that she’s met many fans who have respected her character so much even though she’s a psycho. Mrs. Voorhees, like Jason, is just a mentally-ill person who loves her son just a tad bit too much. Learning more about these characters helped me realize that Friday the 13th is such a clever, campfire story. It’s that type of story that you’d tell around a fire in the middle of the woods with your friends. I’ve only seen Friday the 13th in its entirety once in my life. Now that I’ve become an expert on the movie and its ten sequels and remake, I think I’m gonna give it another shot. I’m sure I’ll appreciate it more.