Posted at 13:45h in Movies, Reviews by FlixFling
0 Likes
Share 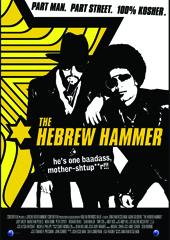 Stereotype jokes have always been one of the things on my top ten list along with a good foot rub and long walks on the beach. Luckily for me, The Hebrew Hammer, a 2003 Jewish Blaxploitation film was chock full of every stereotype I could dream of (though no foot rubs or long walks on the beach). Every single joke is just full of mockery of some group. I loved it.

Our story begins with a nice Jewish boy named Mordechai Jefferson Carver (Adam Goldberg) who roams the streets in his pimped out Caddy spreading Jewish values to all the young boys and girls. He is a “Certified Circumcised Private Dick” who can help you “If you’re in trouble…and you’re a Jew…and it’s not past Sundown on Friday”.

Meanwhile, Santa Claus, a figure who has been trying to keep all holidays equal, is murdered by his own anti-Semitic, racist, mildly unattractive son Damien Klaus (Andy Dick).  Klaus’ goal is to make Christmas the only holiday celebrated before the New Year by eliminating Hannukah and Kwanza. The Jewish Justice League tries their darndest to recruit the Hebrew Hammer to save the day, utilizing Esther Bloomenbergensteinenthal (Judy Greer) as a sort of frummy sex-bait. With the help of his friend from the Kwanza Liberation Front, Mohammed Ali Paula Abdul Rahim (Mario Van Peebles) what unfolds is a mildly offensive (to all cultures) attempt to rescue Hannukah and Kwanza.

As a young jew-ess I found every joke hilarious and found myself “lol-ing” multiple times. Each time Mordy whined, or a quip was made about the nonexistent Jewish athletes, or some Jewish guilt technique was used, I would giggle to myself, thinking “yes that is slightly based in fact as many stereotypes are”. However, I felt that if you weren’t one of The People or an African American this movie would be an uncomfortable viewing. I pictured my gentile friends laughing, then looking around nervously, not being sure if it was OK to laugh.