Posted at 09:18h in Movies, Reviews by FlixFling
0 Likes
Share 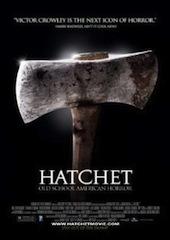 Before I talk about Hatchet let me talk about the Final Destination film series. The reason there have been five movies is because audiences get a kick out of watching people die in creative ways. Death by burning to death in a tanning bed. Death by roller coaster. Death by laser eye surgery and gymnastics and decapitation and strangling in a bathtub and getting hit by a truck blah blah blah. The list goes on forever. The movies care more about gore than plot originality (except for Final Destination 5, which came out last year and had a surprisingly great twist ending). That’s pretty much the same thing with Hatchet, writer/director Adam Green’s bloody, gory, disgusting, violent, brutally over-the-top 2006 slasher film. It cares all about death and having fun with the horror genre but not about plot. I can’t lie and say I wasn’t entertained by the movie because I was. It’s pretty awful, but it’s that type of film that I wouldn’t mind putting on when I’m doing homework that I don’t wanna do.

Adam Green certainly succeeds at making a horror movie that is aware of how ridiculous it is. The death scenes are so brutal that they earned the movie an NC-17 rating when it was first submitted to the MPAA. Yet there’s nothing to be offended about because the deaths are so fake they’ll have you laughing out loud. The acting is bad from pretty much everybody. The movie is so darkly lit (thanks to its super low budget) that I had to keep checking if my screen brightness was up as high as it could go. And the villain here, Victor Crowley (played by stuntman Kane Hodder), seems to be jealous of Freddy Krueger and Jason Voorhees and desires to look and “work” just like them. He’s a big bulky guy in overalls with a hideously deformed face. His weapon of choice: a hatchet, obviously. When he was a boy he lived with his father out in the swamps of New Orleans. One Halloween night a bunch of bullies walked towards his house and threw fireworks at it, setting it on fire. His father went to the front door and tried to break it down with a hatchet, not knowing that his son had his head against the door on the other side. So he kills him accidentally, and now legend has it that the spirit of Victor comes out at night and walks around the swamp, seeking vengeance.

On Mardi Gras the killer comes out to have some fun when a group of people going on a tour of the swamp end up shipwrecked on a piece of land. The group includes a tour guide who actually isn’t a tour guide, a nerdy guy heartbroken from a breakup, his sassy black guy friend, a porn director, his two hot stars who are always taking their tops off, an old Minnesota couple, and a determined woman named Marybeth who’s on the tour because her brother and father disappeared in the area a while before. So they crash into a rock, one of the people is attacked by an alligator and badly wounded, and then Victor Crowley begins his night of slaughter. And that’s about it. Green came out with an unrated sequel, Hatchet II, four years later in 2010. That movie’s equal in gore but cares more about having a more involving plot (thanks to its twist ending). In Hatchet we just watch people get murdered one after the other and then the credits come up. Crowley is certainly very good at killing characters that we don’t care about, but he’s less memorable than other, more iconic slasher killers.

Nevertheless, Hatchet is a pretty fun, mindless ride for horror fans looking for a movie devoid of an intriguing plot. Hatchet II has a lower rating on rottentomatoes than its predecessor, perhaps because critics were just too tired of watching over-the-top deaths. I actually like the sequel more because its heroine is stronger and Green actually tries to write a decent story. Hatchet III is already slated to come out either at the end of this year or early next year. Sadly, Green isn’t directing it. Let’s just hope there’s a better plot in that one!