Posted at 14:21h in Movies, Reviews by FlixFling
0 Likes
Share 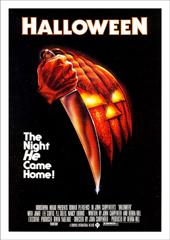 I think if you were born in the 21st century and you watch John Carpenter’s Halloween (1978) then you’ll think it’s stupid and unoriginal. You’ll only think it’s stupid, however, because you weren’t aware that it’s considered to be the first slasher pic in the history of Hollywood cinema. Just think about it, all these hugely popular slasher movies like Friday the 13th, A Nightmare on Elm Street, I Know What You Did Last Summer, and Scream were created because they were influenced by the maker of slasher, Halloween. This is a movie that created a new genre with rules and conventions. There’s a group of young friends and a killer usually wearing a mask with a specific weapon. The only person that lives in the group is a sweet virgin girl. We only care about the virgin and nobody else because they’re all promiscuous and dim-witted. Each person dies in a different way, with a cat or dog being the first victim. Know this fact about Halloween and you’ll realize that this is not a clichéd horror movie because it CREATED the clichéd horror movie.

Some film historians have argued that Bob Clark’s cult horror film Black Christmas (1974), starring Olivia Hussey and Keir Dullea, is the real creator of slasher. The movie, however, wasn’t as commercially successful as Halloween. Others have argued that it was Tobe Hooper’s The Texas Chain Saw Massacre (1974) that brought slasher into cinema. The heroine in both, though, was not a virgin. In Halloween the virgin is Laurie Strode (Jamie Lee Curtis, in her first role) and the killer is Michael Myers, a tall man wearing dark blue coveralls and a white mask. When Michael was a boy he was sent to a sanitarium for stabbing his older sister to death with a kitchen knife on Halloween night. Fifteen years pass and his psychiatrist, Sam Loomis (the legendary Donald Pleasence), is driving to the place in the pouring rain on All Hallow’s Eve. Michael breaks out of the sanitarium and steals Loomis’s car. He drives to Haddonfield, Illinois (no. It’s not a real place.) and starts stalking three high school girls: sweet Laurie, promiscuous Annie (Nancy Loomis), and, well, promiscuous Lynda (P.J. Soles). That night, as kids trick-or-treat outside in the night, Laurie babysits two kids as Michael starts to go on a killing rampage.

The movie came out thirty-four years ago and it still manages to creep me out. The main reason it’s so creepy is that it’s so low-budget. All John Carpenter does is take a simple suburban neighborhood and put a standing Michael staring at the camera. It’s something so small yet so frightening. There are no buckets of gore in the movie (that didn’t come until two years after in Friday the 13th) but it works. Gore is always entertaining to watch in horror movies, but I don’t think it’s ever possible to scare the audience with it. This is why Halloween works so well. Nowadays we rarely get to see horror movies that are more interested in scaring the audience than grossing them out. The score, which was also conducted by Carpenter, is so memorable it defines the Halloween season. Every time it’s October and I hear that creepy music come on the TV my excitement level for Halloween goes crazy. It influences my Halloween spirit to the extreme.

I will always recommend this movie. ALWAYS. It uses a low-budget to scare the audience, and works the same way found footage movies like The Blair Witch Project and Paranormal Activity do nowadays. Most of all you should see the movie to experience the birth of a genre. See the sweet virgin, the sex scene where the promiscuous young woman is topless, the death scene where a young woman is murdered in her underwear, etc. See it all!