Posted at 09:26h in Movies, Reviews by FlixFling
0 Likes
Share 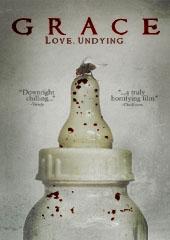 Grace is a movie that made me feel so proud to be a man and not have to worry about breast-feeding. Just wait till you hear its story. Madeline (Jordan Ladd) is boringly married to Michael (Stephen Park). The two have been trying to have a baby but Madeline’s last two pregnancies were unsuccessful. She finally does, and the two decide to meet with a midwife and Madeline’s old friend, Patricia (Samantha Ferris), at a small clinic in the town. One night the couple gets in a car accident while driving home. Michael is killed. Madeline survives but her baby does not. Distraught as ever, she stays at Patricia’s clinic so she can have a stillbirth. In a tragic scene, Madeline gives birth to her unborn baby and cries for her to come alive. Then a miracle happens. She comes alive! Grace, the baby’s name, seems like a normal toddler at first but then weird things start to happen. Why is her room always filled with flies? Why does she always smell so bad? How come she won’t take Madeline’s breast milk? Perhaps weirdest of all, why does she have such a strong liking to BITING her mommy’s nipples?

You probably know where this is going. Grace turns out to be a cannibalistic baby that can only survive on human blood. Please be warned: THIS IS A STRANGE, DARK, DISTURBING LITTLE HORROR MOVIE. I also really enjoyed it and would recommend it to every horror fan in the world. Why does it work? It’s creepy! Writer/director Paul Solet, who in 2006 came out with a short version of Grace starring Brian Austin Green (a.k.a. Megan Fox’s husband), perfectly maintains a surreal, unsettling atmosphere to the film. He also perfectly handles the amount of gore that’s necessary for the movie. Jordan Ladd has starred in a few notable movies like Cabin Fever and Grindhouse: Death Proof and it’s great to see her in the lead here. She plays a mother who refuses to tell people the truth about her baby and we somewhat agree with her. Why should she? Grace is a very sick baby but can she help it? She’s just an infant after all. Madeline will do whatever it takes to keep her daughter safe, whether that means committing murder or letting her nipples get bitten clean off.

Here the movie works terrifically as a satire on motherhood and child-rearing. I don’t think there’s ever been a baby like Grace in the history of the world but there have certainly been parents who will do whatever they can to protect their children. Solet has crafted a very original script that mostly works. I say mostly because I wish that the movie had dealt just a little bit with why Grace is the way she is. Solet leaves it a mystery and focuses more on Madeline’s dangerous descent into keeping her infant safe and healthy. This works of course but it makes the movie feel just a tad bit unfinished. Did the accident cause Grace to be like this? Does Patricia the midwife have something to do with this? Is Grace just an evil baby from Hell? Solet doesn’t need to flat-out explain why Grace is the way she is but I would have wished he left the audience guessing more. He gives Grace a clever yet unsatisfying final scene

Nevertheless Grace is an eerie, absorbing horror movie that’ll no doubt stick with you.