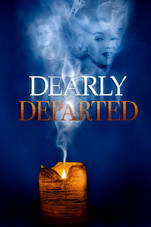 “A Morbid Pursuit of Hollywood Trivia”

Scott Michaels is a walking machine of facts, dates, names, and circumstances. In Dearly Departed: Vol. I, Michaels leads documentarian Michael Dorsey around Los Angeles to capture on film the physical locations of famous peoples’ last days and breaths.

Although this film is a bit morbidly-geared, it has an overriding sense of fun as the predominantly candid shots and interviews are pursued throughout the city. Michaels, in particular, adds to the enjoyment of sitting back and watching this distribution of his mesmerizing – yet often nerdy – bank of knowledge.

The film begins without gory photos or images of mangled bodies or burned remains, covering people like Albert Dekker and River Phoenix. Once the subject gets to the Black Dahlia (Elizabeth Short), the infamous and gruesome pictures of her meticulously mutilated body are strikingly displayed once again before the masses. Following, the Dahlia, though, things get back to being more fun than horrifying.

Any entertainment buff – or trivia buff – will appreciate this effort to document and share this wealth of information and collection of images in the Dearly Departed. The opportunity to see the changes in landscapes and architecture to Los Angeles over time adds a sense of reality to one of the most romanticized and dramatized places in the world.

Also very present is the reality of human life and suffering, demonstrating what a spectacle it can all be.

Read more about this film

Write your own review