Posted at 10:09h in Movies, Reviews by FlixFling
0 Likes
Share 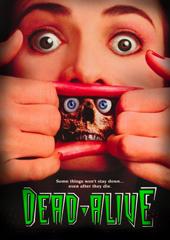 Before Peter Jackson made big Hollywood epics The Lord of the Rings and King Kong, he made cult classics. Dead Alive, Heavenly Creatures, and The Frighteners were his first movies, and combined they didn’t make more than one billion dollars total. The Frighteners is a strange horror/comedy about a medium (Michael J. Fox) who uses his talent of seeing ghosts to try and stop a murderer who’s already dead. Heavenly Creatures is also a strange thriller based on a true story about two friends (Kate Winslet, in her first movie role, and the underrated Melanie Lynskey) who live in a dream world and plan to murder one of the girl’s mother. Then there’s Dead Alive, a zombie horror/comedy that’s so strange I’d call it The Evil Dead of New Zealand. It’s been known as not just the bloodiest New Zealand movie of all time but the bloodiest movie of all time, period. I completely agree.

According to the film’s trivia on IMDB, fake blood was pumped out at five gallons per second in one scene of the movie. Five gallons in every second?! Is that possible?! If you have a weak stomach then skip Dead Alive. It’s a disgusting movie with dismemberments and buckets and buckets of gore from beginning to end. Then again you won’t for a second feel offended by the violence. You know how parents always tell their kids that ketchup is used in movies as blood when in reality red-dyed corn syrup is? Well, in Dead Alive it actually looks like they used ketchup. This is a movie about a Sumatran Rat-Monkey (and no, they don’t actually exist) that is brought to a New Zealand zoo and ends up creating a huge herd of zombies. A wimpy guy named Lionel (Timothy Balme) goes on a date to the zoo with a shy Spanish woman named Paquita (Diana Penalver). His domineering mother (Elizabeth Moody), who doesn’t want her son dating anyone, spies on them and gets too close to the rat monkey’s cage. The monkey is totally laughable because it looks like a clay-mated prop from an Ed Wood movie. After getting bitten she grows sicker and sicker at home. Lionel takes care of her but grows a little concerned when he walks in on her eating a dog. She dies but then comes back to life and kills and infects a nurse. Soon more and more people get infected and because Lionel doesn’t know what to do with them he just locks them in the basement and tranquilizes them to keep them quiet. Hmm, what a smart idea. This all leads to a ghastly climax that really does feature the most gore I’ve ever seen in a movie.

Dead Alive understands what The Evil Dead series did so well: make a ridiculous horror movie as ridiculous as possible. The movie is gut-wrenchingly (no pun intended) funny and features moments that seem so random I had to check if I was still watching the same film. Take for example the scene where Lionel is trying to battle a few zombies in a graveyard and then a priest enters and starts kicking ass like Jackie Chan. I also don’t think I’ve ever seen physical intestines come alive and strangle somebody in a movie before. I do prefer the Peter Jackson epics a bit more than his cult ones (I can’t wait for this December’s The Hobbit: An Unexpected Journey) but you’ll without a doubt get a kick out of Dead Alive.