Posted at 10:22h in Movies, Reviews by FlixFling
0 Likes
Share 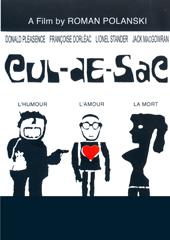 Consisting of quality visuals and a thoughtful pace along with quirky complexities of dysfunctional relationships, Roman Polanski’s Cul-De-Sac manages to serve as a bridge between two very different filmic worlds without compromising any amount of cinematic quality from itself. Themes of isolation are mixed with lighter and more upbeat notions of getting by within these thoughtfully caricatured subjects. None are very likable but all are captivating to watch due to their realism. As such, Polanski’s film achieves it’s own intriguing and entertaining voice within overlooked 60’s cinema.

The opening title sequence immediately draws one in with it’s cool and from there the movie takes off to touch upon lustful affairs, passive aggressive relationships, notions of isolation, trust, and the humane versus the vicious. The viewer constantly measures and remeasures the compassion in each character through their antics and all the while is entertained by them. Cul-De-Sac is a film that plays against cinematic expectations of the Comedy and Criminal film but Polanski does not compromise the film’s entertainment value. It is off kilter and by all means a fine example of black comedy. All the while it is also a drama with much to say about individuals and their trivial ties with one another. It is a delicately crafted tense, dark, and comedic story that like many of the directors future works leaves the viewer hating or loving it. As such, Cul-De-Sac competes with Polanski’s best directed due to it’s stylistic cool, dense themes, and thoughtful comedic approach. A must see for Polanski fans.