Posted at 11:23h in Movies, Reviews by FlixFling
0 Likes
Share 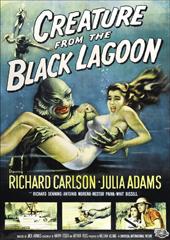 In the olden days Universal Studios was renowned for making monster movies. The Wolf Man, Dracula, Frankenstein, The Phantom of the Opera. The list goes on and on. The four I just mentioned are perhaps the most famous but a fifth one, Creature from the Black Lagoon, is usually mentioned a lot when film historians/professors discuss the history of the Hollywood monster genre. It’s nowhere near as frightening as Dracula or Frankenstein but the cheesiness of it all makes for a satisfying experience. The fact that the movie was released in 3D is truth enough of how enjoyable this must have been when it came out in 1954. Of course I never really noticed anything that three-dimensional about any of the scenes.

So the monster here isn’t a werewolf or a vampire but a Gill-man, an Amazon River creature. It’s amphibious/reptilian-looking, about six feet tall, and doesn’t speak all suavely like Bela Lugosi in Dracula (according to Wikipedia the creature is a piscine amphibious humanoid, whatever that means). Dr. Carl Maia (Antonio Moreno) is exploring the Amazon and comes across a fossilized hand with webbed fingers, which he believes is from the Devonian period. He goes to his ichthyologist friend, Dr. David Reed (Richard Carlson), who convinces him that they should try and find the rest of the skeleton because they’ll make a fortune at the marine biology institute that Reed works at. A large group of them are assembled, including Reed’s girlfriend, Kay (Julia Adams), who has no real job in the movie except to scream and trip in the most fake way possible. They go to the Amazon and come across the creature, of course, which results in the creature killing them one by one. Gill-man also has a particular liking for Kay but not in the romantic way that King Kong does for Ann. I don’t think this is love. I think Gill-man just wants to get her into bed.

Creature from the Black Lagoon certainly has its share of dumb moments. In one scene Kay decides to go swimming in the river when no one is looking. First of all, why would you swim in the Amazon River?! I’d be less afraid of the creature and more afraid of crocodiles and piranhas. The underwater scenes look like they were filmed in a swimming pool and even the fish that we see swimming around look like pet goldfish. It’s obvious that Gill-man isn’t CGI but a man in a suit. It’s cheesy, sure, but the amount of effort put into the suit is extremely well-done for 1954. The scales that extend down the creature’s arms are intricately detailed and the eyes of the creature exactly match the eyes of an amphibian or reptile. I even read somewhere that they weren’t contacts worn by the actors, but were part of the suit, which made it quite hard for them  (Ben Chapman, who played Gill-man during the land scenes, and Ricou Browning, who played him in the underwater scenes) to see.

I liked the movie because it uses all of the rules in making a monster movie. It uses rule # 1, for example: never show the full monster from the start. In Alien we only see quick flashes of the monster until the very end. The same happens in Creature from the Black Lagoon. We only see its hand emerge out of the river. When it attacks two adjunct characters in the beginning the camera mostly films it from its (or him, or her. It’s called Gill-MAN but we never see any private parts to support this argument) point of view. When we finally do see Gill-man it’s not really scary but it’s pretty cool to look at. You’ll feel more scared if you watch Dracula or Frankenstein (and they came out in 1931, I might add), but Creature from the Black Lagoon is a totally harmless monster flick.