Posted at 08:52h in Movies, Reviews by FlixFling
0 Likes
Share 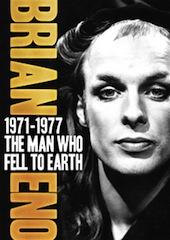 Brian Eno’s story is truly remarkable. Within the music world he is a singularity who’s journey began with one of the most seminal rock bands of his era, Roxy Music, only to leave and begin an unforeseen career as a true artist in his own right. It’s no wonder this documentary, which dives into nearly each musical project of his career, is two and a half hours long. The time it takes to cover the thought processes and emotional stirs of each project and collaboration Eno embarked on cannot be compacted into a shorter film without compromising important content. However, the length is not off-putting. In fact, the documentary is enthralling enough to ease us through Eno’s story quite nicely without drudging along.

The quality of this documentary is on par with the BBC music documentaries, Once Upon A Time In New York and Synth Britannia. It even has the same narrator and similar interviewees such as music commentator Simon Reynolds and author Mark Prendergast. These familiar music enthusiasts give detailed biographies of Eno’s processes and also the social impact that his projects had on the music scene on both sides of the Atlantic. The quality of information coming from the commentators, musicians, and collaborators interviewed is insightful, entertaining, and quite inspiring to the creative spirit.

The only quarrel I have is the lack of attention on Eno’s production collaborations with the post-punk scene. They skimmed by it hardly giving any insight on how those collaborations started or the processes behind them; unlike the massive of amount of insight into Eno’s collaborations with the German ‘Krautrock’ scene, David Bowie, and Eno’s ties to contemporary classical and minimalist composers. However, I suppose the film might have extended another hour to do so. All in all the film displayed a vast amount of Eno’s discography and the means to how they came to be. For fans of Brian Eno and for those that are familiar but not too aware of his place in history, Brian Eno-The Man Who Fell To Earth is a fine documentary that gives a very great look into one of the most significant modern artists of the late 20th and early 21st century.