Posted at 09:20h in Movies, Reviews by FlixFling
0 Likes
Share 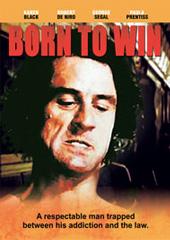 Ivan Passer, a Czech native director, makes an arrestingly free and honest film in Born To Win. It’s a junkie film that plays by all the normal rules of it’s genre but because this film was made in a time when a great number of films happened to have the luminescence of the golden age that was 1970’s New York City slum life, film addicts will most definitely get their fix in this movie.

This badly lit film stars an incredible line of overlooked actors. George Segal plays the sympathy-inducing junkie hero perfectly but it is Karen Black that steals the camera away each time she is on the screen. There is a freedom that pours out of her acting that one can’t help but get caught up in. She bares this natural beauty both in her appearance and personality that puts one in awe. Appropriately, she is Segal’s one way out of his junkie lifestyle. The theme of redemption through love is such an enticing one in this film and avoids seeming cliché through Black and Segal’s s acting. The naturalism in the film in regards to the fight between the “romance of heroin” versus the “romance of love” is so spot on and all the other factors of the junkie lifestyle, debts, hold ups, deals with cops, are all very honest. This tension sums up what east coast filmmakers at the time that were interested in the druggie lifestyle were all about. New York once again sets the stage, the pace, and the tone of a film that gives a tough look at an all too real and abundant lifestyle of the inner city at the time.

Of course, I forgot to mention Robert DeNiro plays a role in this film and although it is DeNiro’s face that seems to be on the covers and as the main name, it is not his film by any means. His role is not bad and in fact he plays it very well, but all of the marketing use of his name and face for this film is nothing more than that, a marketing technique; for a film that is astonishingly overlooked made by actors and a director that are unfortunately also overlooked. Despite the superficial “qualities” of this film, such as it’s graininess or its bad lighting, the writing acting and artistic pace of Born To Win will surely have film junkies begging for more.