Posted at 09:08h in Movies, Reviews by FlixFling
0 Likes
Share 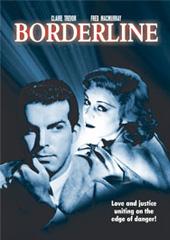 To be honest, the only thing I know Fred MacMurray from is Double Indemnity, and for that reason, I always associate him with gritty film noir.  So when I saw the description for Borderline, I was expecting murder, inner monologues, and a femme fatale.  I was quite surprised when I ended up watching a light crime/comedy/romance.

Borderline is about a Los Angeles police officer, Haley (Claire Trevor), who attempts to go undercover in a Mexican drug cartel, only to be quickly apprehended by a US Customs Officer, McEvoy (MacMurray), who also happens to be undercover.  All of the sudden, the two, acting as a drug runner and his moll, are headed across the border, where each is planning to have the other arrested.  Unsurprisingly, a romance kindles during their trip across Mexico.

I’m not entirely sure how comical the film was supposed to be, but there are certainly scenes that will make you smile.  For instance, while en route to the border, when Haley and McEvoy are staying in a hotel as husband and wife, each dusts for fingerprints while the other is out of the room.  There are a few cute parts like that.  Some of the detail and intrigue on the crime side are sacrificed for the romantic half of the film; it would have been more interesting if I knew what the hubbub was about.  Nonetheless, Borderline is quick and entertaining.   If you’re looking for something between Detour and It Happened One Night, this is your movie!