Posted at 09:28h in Movies, Reviews by FlixFling
0 Likes
Share 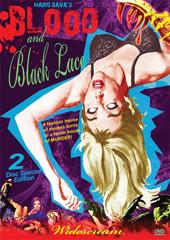 It’s incredible, and somewhat uncomfortable when you think about it, how filmmakers can make human deaths look so beautiful on camera. Dario Argento’s horror classic Suspiria, for example, is utterly revolting but every time a character dies the scene is brightly colored and gorgeous to watch. That’s the same case with Mario Bava’s Blood and Black Lace, a classic slasher pic that also works as a whodunit. The death scenes are BRUTAL, especially when you think about the fact that the movie came out in 1964. You watch these scenes and can’t ever look away. Is this not a little creepy? Is it not weird to become aesthetically pleased by watching a character die in an awful way? Blood and Black Lace is audacious in that it dives into the uncanny side of our subconscious. We end up feeling like the killer, mesmerized by the deaths.

The movie belongs in a certain type of genre: the giallo genre. Giallo died out near the end of the twentieth century and is pretty much the same as the mystery/thriller genre a la Agatha Christie. In the opening of the movie a model named Isabella (Francesca Ungaro) walks up to a fashion salon. She sees a black figure in the distance and runs away. The person strangles her to death and stuffs her body in a closet inside the building. Right away this scene is beautiful to look at. The red poncho that Isabella wears conspicuously stands out in between the dark woods. The color foreshadows danger, and pops up numerous other times in the movie. When we first see the killer his appearance is genuinely frightening. He wears a black coat and hat with a white mask devoid of any features. I don’t know about you but if I saw someone wearing that I’d get pretty scared.  Anyway, the cops get involved, led by Inspector Sylvester (Thomas Reiner), and think it’s just a random crime. Pretty soon more models start getting murdered. So who’s the killer? Is it the inspector? Is it the manager of the salon, Max (Cameron Mitchell)? Is it his lover, Christina (Eva Bartok), whose husband recently died? Is it one of the models? All we know is that the killer wants Isabella’s journal, which seems to contain secrets that he doesn’t want getting out.

Sadly, Blood and Black Lace was dubbed in English and the dubbing is a million times worse than it is in Bava’s other movie, Black Sunday. You get used to it pretty quickly though, and the movie works as a macabre work of art. The red isn’t the only color that stands out. EVERY possible color in the rainbow is in the movie and stands out more than anything. It’s a feast for the eyes, even in the scene where a model’s head is pressed against a hot furnace. I also love how the movie is part slasher part whodunit. Most slasher films, excluding the Scream series, become too concerned with killing off characters and less with determining who the killer is. Blood and Black Lace cares about its story, a trait that mostly doesn’t exist in modern slasher movies. There’s an unexpected twist at the end of the movie that I didn’t see coming and it will probably surprise you too.

Like Black Sunday, I can’t imagine how shocking Blood and Black Lace must have been when it was released in the 60s. It’s a movie about death, blackmail, fear, eroticism, and every other taboo subject that would have had Hollywood going “No way!” in 1964. It’s a disturbing movie for sure, and some may find it misogynistic because all the victims are gorgeous models. Try not to think that way. This is just a movie, after all, and every death is necessary because it’s important for the story. The movie will have you guessing but it will mostly be a treat for the eyes.

Just remember what I said: try and get used to the awful dubbing!