Posted at 09:10h in Movies, Reviews by FlixFling
0 Likes
Share 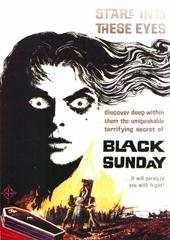 Black Sunday (which is also known as The Mask of Satan) is one of the most visually gorgeous horror movies of all time (and it’s in black and white!). It has the vibe of a Tim Burton Gothic horror tale involving curses, witches, and zombies. Burton himself has even said that Black Sunday is his all-time favorite horror movie. Anyone can see the movie’s inspiration on the director. The most popular type of horror genre nowadays is the found footage one where a present-day character records everything on camera and all hell breaks loose. I’d say the last truly fantastic Gothic horror movie I’ve seen was The Others in 2001. They’re never made that much anymore and they should be. They’re aesthetically pleasing from beginning to end, and there will never be a better one than Black Sunday.

The movie starts off in 1630 in Moldavia. Princess Asa Vajda (the beautiful Barbara Steele) and her paramour, Javuto (Arturo Dominici) are about to be burned at the stake for practicing witchcraft. In an iconic scene the Mask of Satan, a metal mask with spikes on the inside, is hammered into her face. Before that happens Asa vows to curse her brother’s descendants because he revealed her witchcraft to the authorities. Two centuries past and doctors Thomas Kruvajan (Andrea Checchi) and Andre Gorobec (John Richardson) are traveling past her tomb when the wheel on their carriage breaks. They explore the crypt in the cemetery where she’s buried and come across her tomb. Kruvajan accidentally breaks it while trying to kill a bat (a very fake-looking bat, I might add) and reveals the dismembered corpse of Asa. He bravely removes the mask from her and then a drop of his blood accidentally spills into her eye socket. Uh oh. Kruvajan and Gorobec leave the crypt and meet Katia (also played by Steele), who looks exactly like the witch. She’s living in the nearby castle with her brother, Constantine (Enrico Oliveiri), and father, Prince Vajda (Ivo Garrani). It turns out that Katia is a direct descendent of Asa and the witch is now coming back to life to drain her blood and live forever, with the help of her zombified friend, Javuto.

The movie is actually Italian but Hollywood annoyingly dubbed it in English. I’ve looked everywhere to find the original version but it’s NOWHERE to be found. Don’t let the bad dubbing (seriously, is there such a thing as “good” dubbing?) bother you. Black Sunday is creepy, beautiful, sexy, and absolutely thrilling from beginning to end. The cinematography, lighting effects, and production design are first-rate. There are images, like the one of mist moving through an empty cemetery, that come right out of every Gothic horror story imaginable. Steele (who’s still living) is actually British and starred in many other Italian Gothic horror movies, as well as Federico Fellini’s cinematic classic, 8 1/2. With her big bulging eyes and the seductive way that she hypnotizes strangers into doing deeds for her, Steele’s performance is iconic. The movie’s a bit cheesy at times (like the flying bat and a few moments where Katia theatrically faints in front of the camera in shock) but director Mario Bava does a smooth job of creating frightening moments. The scene where Javuto rises from the grave is extraordinary. The camera tracks closer to him as thunder roars in the background. Just the image alone of a spiked mask through a woman’s head is disturbing enough for 1960.

The movie pushed many boundaries when it was first released because of its violent content. Much of it was censored in certain countries, and I even read somewhere that in the original Italian version Asa and Javuto were brother and sister, implying that they had an incestuous relationship. I honestly have no idea how Black Sunday got made in such a censored time in Hollywood history. It’s not surprising, however, that the movie ended up being a worldwide box office success. I don’t think there will ever be a Gothic horror film as brilliant as this.