Posted at 09:06h in Movies, Reviews by FlixFling
0 Likes
Share 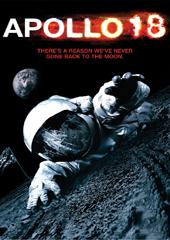 In the late 60s NASA cancelled the Apollo 18 mission to land on the Moon. Was it because they found out that there were evil aliens living on the planet? I doubt it. I’m pretty sure it was cancelled because of money issues. In Apollo 18, a found footage horror movie that came out in September of last year, a group of male astronauts that were supposed to go on the mission are given the opportunity to secretly go to the Moon. So is this real footage of a government cover-up mission to the Moon?! Of course not. These are actors, people. I don’t think Hollywood can ever make a REAL found footage movie because it’s totally unethical to show people die on camera for the world to see. Werner Herzog’s Grizzly Man is part documentary part found footage but it never shows when the real-life protagonist and his girlfriend were viciously murdered by some grizzly bears. Also, if a found footage movie came out like this, one that claims to prove the existence of extraterrestrial life, then mass hysteria would follow. I don’t think Hollywood or Barack Obama would want that.

Apollo 18 is a pretty clever idea for a movie, except it’s not scary. In fact it’s just plain ridiculous. I’m gonna have to give away spoilers to talk about why the movie stinks so unless you’re dying to see this movie and don’t want me to give anything away then STOP READING NOW. If you don’t mind then allow me to say that the aliens in this movie are tiny rocks. Let me repeat, they’re tiny rocks! What?! Why?! How in God’s name can director Gonzalo Lopez-Gallego and writer Brian Miller think that these types of aliens are scary? Do they think that when we exit the theater and see a rock we’re gonna scream and go “Oh my God it’s an alien from the Moon!” Seriously, guys, it’s just a rock! The aliens in Close Encounters of the Third Kind are scarier, and they’re not even evil! There’s one admittedly creepy shot in the movie where the camera captures what looks like giant aliens with big black eyes. So are these other aliens? Are these the parents of the pathetic rocks? The movie never explains and this is bad because I would have loved for these bigger aliens to be the villains. I think the whole world can agree with me when I say this.

The movie does have a few creepy shots and it nicely recreates the old-fashioned camera quality from the 60s. I think any found footage movie can have at least one creepy moment; that’s why they’re becoming more and more popular in Hollywood. Except in any found footage movie you should at least care for the characters. In Apollo 18 I cared for absolutely nobody. Paranormal Activity 3, for example, is pretty much the same as the first two movies except I still manage to care for its characters every time I watch it. Jennifer Carpenter’s character is obnoxious in the rabid zombie found footage flick Quarantine except deep down I couldn’t help but yell “Yeah! Do it! Get out of the house! Don’t die!” Apollo 18 tries to make us care for its protagonist with “real” footage of him hanging with his wife and newborn daughter but it just doesn’t work. Maybe this all has to do with the wimpy rock aliens.

There are better, scarier found footage horror movies out there. This is not one of them. Check out The Blair Witch Project, the one movie that created this genre.