Posted at 14:04h in Movies, Reviews by FlixFling
0 Likes
Share 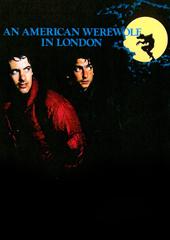 John Landis’s An American Werewolf in London (1981) is a strange, strange horror movie. I’m always entertained by it and I think anybody looking for a gory werewolf movie will be too, but I’ve always felt a disappointment for the film. I’m saying it’s strange because it was directed by Landis, who at the time of the movie’s release had become famous for directing National Lampoon’s Animal House (1978) three years prior, which is considered one of the greatest comedies of all time. So in case you don’t get what I’m hinting at An American Werewolf in London is a comedic horror movie with a hungry, flesh-eating werewolf and funny parts that seem like they were right out of Animal House. The movie has incredible special effects, a steady balance of horror and comedic moments, and a memorable performance from David Naughton (whose career didn’t really skyrocket after the movie’s release). It’s just the ending that I’ve never liked.

The beginning of the movie nicely sets up everything. David (played by Naughton), an American college student, is backpacking with his buddy, Jack (Griffin Dunne), in the Yorkshire moors in England. The two come across a pub called “The Slaughtered Lamb” and it deserves to be called that because the people there start acting really weird when they enter. They warn them to be careful outside. What’s even weirder is that they have a huge pentagram on the wall. So David and Jack leave, obviously, walk deep into the creepy moors (and it’s nighttime, of course), and then a giant werewolf attacks the both of them. Jack is killed, but David manages to survive with big scratches on his body. So, David has been scratched by a werewolf, need I say more or should I explain what happens to somebody if they’re infected by a werewolf?

Every time I watch the scene when David first transforms into the werewolf I can’t help but scream “OH MY GOD THAT’S SO AMAZING!” It’s an iconic scene, and I’m sure if you’ve ever watched a documentary where they have a montage of horror movie clips then you’ve seen this one. What’s great is that it’s all makeup, prosthetics, and robotic body parts. None of it is computerized special effects. If An American Werewolf in London had come out last year then the transformation scene would have been all CGI and less realistic. In this movie the makeup and prosthetics don’t feel dated at all. Naughton may look like a guy that looks like he was kicked out of The Beatles but he’s funny, likable, and totally right for the role of David. Another actor that’s always unlooked at in the movie is Jenny Agutter, who plays a sexy British nurse that David starts to have feelings for. There’s one scene I love where David kisses her for the first time in the hospital. She is surprised and then just smirks at him. In her head she’s thinking “That was weird, but you know what? I think I like you.” There’s nothing more entertaining than watching a hot, sassy, smart woman take on a guy that seems way out of her league.

The real strangeness of the movie comes from when David starts to see ghosts of the people that he killed. In the hospital he first sees (in really incredible makeup) the ghost of Jack, who warns him that he needs to kill himself because he’s going to turn into a werewolf in a few days and kill innocent people. Later on the ghosts of his victims start appearing in front of him and telling him the same thing. Ok…why is this happening in the movie? Well, I think Landis put this in to add to the comedic aspect of the film, though it comes off as more weird and bizarre than funny. I like the weirdness of it all because I always love weird movies. Yet the scene where David has a nightmare where monster Nazis come into his house and murder him and his family? That I’m not sure I like because it makes NO SENSE WHATSOEVER.

Also, like I said at the top, I don’t like the ending. It’s just so lazy! It’s not surprising or clever or memorable. It just ends and then the credits come up. That’s it. The movie knows which direction it’s going three-quarters into it, but instead of changing that direction the way a good screenplay does it just remains the same and then ends.

I’ve tried to ignore the ending and just enjoy everything that happens before it. Sometimes it’s worked and sometimes it hasn’t. I’d recommend the movie if you want to be grossed and weirded out (and laugh, obviously). Just be forewarned, you’ll yell “What?!” by the time the credits roll at the end.