Posted at 10:07h in Movies, Reviews by FlixFling
0 Likes
Share 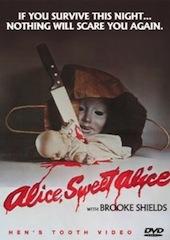 Alice Sweet Alice works like any other 3 act structured film, but I like to think of it in two parts. The first half feels much like a typical slasher film. There’s that b-movie slasher quirkiness around it, because the killer is a twelve-year-old girl.  However, it is the second half of the film that proves Alfred Sole and Rosemary Rivto to be unique, thoughtful, and compelling filmmakers. The second half of the film breaks loose of those slasher/horror tropes that one might enter this film expecting. Instead, I couldn’t help but think of the word, “European” as I watched on.

The first half is Alice’s movie but the second half is much more focused on the mother, played by the beautiful Linda Miller. It’s a drama but never dives too heavily into sappiness. It’s just enough to give thoughtful and compelling insight into these characters, and that is what gives this film the weight to withstand the test of time compared to other slasher films. The characters and story came before the horror. Not since I had seen Andrzej Zulawski’s Possession, which came years later, have I seen a horror film with such focus on character before the momentary shock factor. I don’t understand why this movie has not had more attention. It is truly a breath of fresh air not only in the horror genre, but also in the spectrum of good screenwriting as well.

This film would have flattered Hitchcock if he had seen it when it came out.  It has the Hitchcockian style both with the screenplay and it’s cinematography, as well as a shot that plays direct homage to the look of Psycho. Not everyone can nod to Hitchcock and get away with it without coming across as pretentious or dumb. The makers of this film can. I believe that Alice Sweet Alice will catch on to more film enthusiasts and be noted, as one of the finest of it’s kind.