Posted at 10:19h in Movies, Reviews by FlixFling
0 Likes
Share 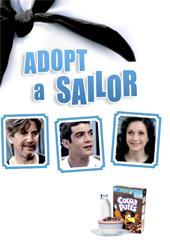 Sailors file off of a naval ship.  Gene Kelly and Frank Sinatra singing “…the Bronx is up and the Battery’s down…” pops into my head.  Later, On the Town is criticized horridly, which irks me, since I love that movie and most stupid musicals like it.  But that’s off topic. I’m talking about Adopt A Sailor, a 2008 film about a bourgeoisie New York couple, played by Bebe Neuwirth and Peter Coyote, who welcome a sailor from Turkey Scratch, Arkansas into their home for a night during Fleet Week.

This film is interesting.  It seems like it may have been adapted from a play, based on the simple set, simple blocking, and pressure-cooker plot.  The couple, as bougie couples are wont to do, has fallen out of love and grown resentful of each other.  The sailor, as 20-year-olds from Arkansas are wont to be, is fresh faced, optimistic, and an ardent believer in true love.  As the night goes on the couples’ fights grow more explosive – their comments towards each other more biting.  In turn, the sailor extols his naïve, but hopeful opinions on life and love.  By the time the sailor leaves their apartment, the couple is not the same as they were when he came.

I wouldn’t watch this film when you’re sleepy.  You’ll fall asleep, and though the screams of the ailing marriage will sporadically jolt you awake, I would still suggest watching Adopt a Sailor when you’re bright-eyed.   Do watch it though.  It’s an interesting examination of relationships, and the transition between stage and screen – a good find for hardcore film buffs.