06 Aug Review – Across The Bridge

Posted at 11:07h in Movies, Reviews by FlixFling
0 Likes
Share 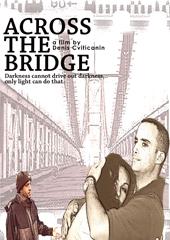 Across the Bridge (2005) has the steadfast quality of a student film though it is instead a foreign film by an adult director, Denis Cviticanin. Trying to be socially conscious, as most student films are, it looked at the strife in Belgrade and the emotional sorrow it caused. Meanwhile the sound quality was horrible and the score sounded like something from an 80s movie. They covered all their student film mistake bases. I couldn’t help but be interested but also wanting of so much more.

The story behind Across the Bridge is beautifully sad. Fighter pilot Ben Rubin (Daniel Sebal) forced to  “do his job” and drop bombs on the country of his wife. He and the troops are forced to knock out each bridge in the country. The trauma of the event leads him to have a great fear of bridges. He seeks Dr. Sokol to assist him.   A tragedy of this proportion is certainly interesting if played out right. However it being played out right is rare, and Across the Bridge only does a semi-decent job.

The sound quality of the film was mediocre at best. I understood that the film needed more of a documentary feel, but I found that the absence of well-crafted sound made the film hard to get into at first. As the film goes on, and there is less voice-over and more music, the film improves.  In the beginning, specifically the credits, I found the music to be 80s-esque and cheesy. For a serious film, it did not have a very serious tone.  However, as the film carried on the quality improved.  I began to no longer be distracted by the music and instead enjoy it.

Despite its flaws, I found Across the Bridge to be an OK film. If better executed it could have been fantastic.  Instead, the quality took away from the film. I appreciated, however, the efforts to tell a beautiful story and to confront the bitterness of war. It shows how battles not only destroy lives but also families and minds. I loved Across the Bridge’s look at humanity and how a second chance can change lives. It was incredibly beautiful. I was happy for the emotional roller coaster ride it provided. I rooted for Ben and hoped things would go well for him.  And isn’t telling a story and making someone happy all it’s really about? Bravo, student project-esque short film. I appreciated the effort!