Posted at 09:07h in Movies, Reviews by FlixFling
0 Likes
Share 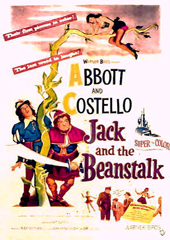 What an education in classic comedy I’m getting!  Last week, I watched my first Laurel and Hardy and now onto Abbott and Costello!  Jack and the Beanstalk is a retelling of the classic tale with the humorous styling of Abbott and Costello.

The film begins with Abbott and Costello acting as babysitters for a precocious little boy.  Costello sits down to read the boy a story and ends up acting out the whole thing.  The film takes a very Wizard of Oz turn, as it turns from black and white into Technicolor and has characters from the real world playing characters from the story.  The story world, in which Jack the Simpleton climbs the Beanstalk to rescue the princess, is vibrant and funny.  Abbott and Costello combine slapstick and quippy lines to make a film that is humorous, no matter what your tastes.  The film is also surprisingly heartwarming, with a genuinely cute love story woven into the plot.

Abbott and Costello’s Jack and the Beanstalk is a film that would entertain audiences of all ages.  It’s perfect for a family movie night.  And if you haven’t had enough by the time it’s over, you can move right on to Abbott and Costello Meet the Mummy!