Posted at 11:42h in Movies, Reviews by FlixFling
0 Likes
Share 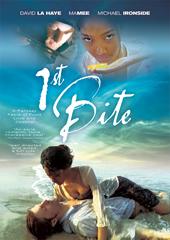 When I saw the title, First Bite, I immediately thought the film was a vampire movie. I soon realized it was not, but was not entirely sure what I was looking at.  I’m not sure I ever really did figure it out.  There were mermaids, and talking womanstones, and curses all set either in Thailand, Montserrant, or Montreal (or at least with a background that was supposed to look like those places). Such is the life of a comedy-viewer. I liked the supernatural mysticism and altogether weirdness of the movie at the same time. It was not exactly well-written, neither did it have good performances, but I still couldn’t stop watching it, despite the lack of vampires.

First Bite ended up having a weird amount of blood, despite not being a vampire flick. This was okay with me because I haven’t watched True Blood yet this week and I was going through a little bit of a drought. I thought the scenes with blood were all really oddly beautiful. It was a good, subtle but unsubtle artistic device.

The writing was a little over the top.  The main tagline “We kill, we eat what we love…” speaks to this overzealousness.  What does that even mean? By loving people you have to eat them and kill them? That is not standard for everyone. The characters did not handle activities the way normal people do: if they had simply talked before the events transpired everything would have been slightly different. All the unanswered questions and unspoken words were a little too difficult to handle.

The acting seemed a little too wooden but then also over-dramatic. The actors seemed to go from one alternative to the other.  They were as confused as I was about whether this film was supposed to be humorous, scary, or heartbreaking.  The love interest, Rose (Leah Pinsent) seemed to be attempting comedic acting with her binge eating and clumsiness. Gus (David La Haye) was doing this fancy song and dance where he acted super suave but it actually made him seem strange. Not trying to give anything away, but there’s some blood action. And it’s weird.  Though his blood action is strange, whenever Lake (Napakpapha Nakprassitte) does anything remotely similar it looks sexy and very scary.  She is a fantastic actress who was stuck acting with a mediocre co-star.

And finally…what happened to the Australian man? We NEVER figure it out.

Not one of my favorites, but still an interesting and entertaining film. I would like to go to Thailand now? That’s what we learn from this. Thailand would be a cool place to travel.  There are beautiful rocky coastlines and monks.