Posted at 16:56h in Movies by FlixFling
0 Likes
Share 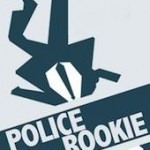 Police Rookie is a hard boiled crime thriller from the early nineteen forties that really packs a punch! A rookie cops father is murdered, and though new to the police force, the young man takes it upon himself to solve the murder. The film is dark and gritty, and all the more enjoyable for its superb cast. Carried by the emotional and passionate acting of Gordon Jones as the fearless rookie, all the supporting actors give great performances. The usually under-utilized Joyce Compton is particularly stirring in a straight role, and as beautiful as ever. When Jones discovers that the murder is a white collar citizen in good standing, the trail of malfeasance and fraud runs even deeper than the killing of his father. Police Rookie is razor-sharp drama that takes things personally.