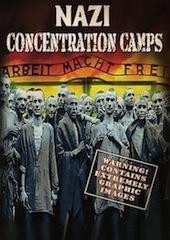 This film is the official documentary report compiled from over 80,000 feet of film shot by Allied military photographers in the German concentration camps immediately after liberation. The footage is a camp-by-camp record taken in order to provide lasting objective proof of the horrors the liberators witnessed. Some emphasis is also placed on the humanitarian work done in the camps by the liberators. Remarkably, the narration refers to the camp victims according to their country of origin only, and no mention of Jews is made.