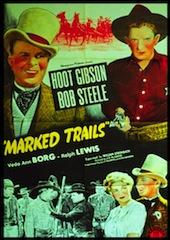 Jack Slade (Mauritz Hugo) and Mary Conway, alias Blanche (Veda Ann Borg), being recognized as known and wanted crooks, by deputy marshal Harry Stevens (Steve Clark), Slade kills him, when he orders them out of town. His son, Bob Stevens (Bob Steele), and friend Parkford (Hoot Gibson), become U.S. Marshals and proceed to rid the town of the cut-throat gang that has been terrorizing the citizens. Bob goes undercover as an outlaw, and works his way into the gang, while Hoot poses as a Dude, who goes about making fiery speeches on behalf of law and order.