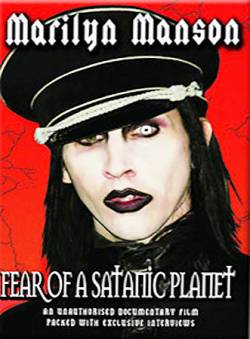 In the past decade, the name “Marilyn Manson” has become familiarly associated with evil, Satan, debauchery, and perverted indulgence. Marilyn Manson – Fear of a Satanic Planet Unauthorized is a 2005 documentary directed by Tom Barber that gives credence to a lot of those associations.

Physically, Marilyn Manson is difficult to look at while simultaneously being a spectacle difficult to look away from. His name alone conjures images of beauty intertwined with horrifying mutilation before any other consideration about the man or the music can even be contemplated. Regardless of the shock and controversy he evokes, Marilyn Manson is a social genius having the exact effect he wants to have.

This film takes a look at Manson’s music, relationships, and personal reflections. His disgust with Christianity and affinity for sexual deviance are prevalent subjects of examination. Overwhelmingly provocative, Manson is a real-life Reverend in the Satanic Church, and states that Christianity, focused on obedience, abstinence, and ignorance, inhibits the progress of the human race.

Marilyn Manson – Fear of a Satanic Planet can be a bit creepy to watch, something that is enhanced by the prominent inclusion of an interview of long-time associate, Gidget Gein, against a checkered backdrop of cockroaches. There are interviews of many other people, as well, and even of Manson himself. As a documentary, this film is overall impressive.

Read more about this documentary