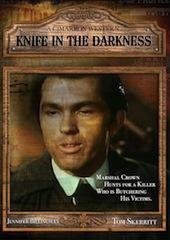 As Cimarron lies under an erie fog there is a murderer walking it’s streets. When a series of brutal knife slayings of Cimarron City dance hall girls take place, Marshal Crown looks at almost everyone as a suspect. Was it the gambler, the knife salesman, the doctor, the traveler, the cowboy, or the drummer? Suggesting that the pattern of murders is similar to that of the “Jack The Ripper” slayings in London, England, Crown must devise a plan to cut through the fog and find the killer before he stalks his next victim.