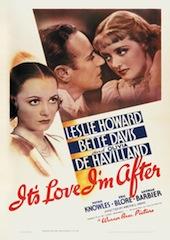 Renowned stage actors Basil Underwood and Joyce Arden are partners on and off the stage. An occupational hazard for Basil is that women often fall in love with what they see of him on the stage, he who sometimes indulges that adoration. Basil and Joyce’s personal life is passionate and tempestuous characterized by constant fighting and making up, which is often continued on-stage under their breaths. After their latest fight and reconciliation, they decide to get married…for the twelfth time. They are determined to make it to the altar this time. But Basil feels he needs to wipe clean the slate first by doing a favor for a stranger, Henry Grant, whose fiancée has fallen in love with him. With his latest script in hand, Basil vows to make Henry’s fiancée fall out of love with him by playing the cad. He finds that it may be more difficult than he first imagined when he finds out that the woman in question is Marcia West, the young woman who professed her love to him earlier in the evening and whose fawning he was thinking about indulging. As Basil is at the West mansion thinking if he should play this latest role as cad or romantic leading man, Digges, Basil’s faithful dresser who is along for the ride, thinks that there is a missing female role in this play, one that would be played perfectly by Joyce. When Joyce arrives on the scene, the question becomes what is acting and what is real life.