10 Aug In Memory of My Father 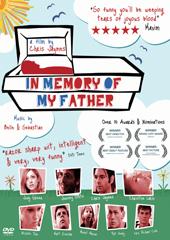 Click here to watch In Memory of My Father now

A self-proclaimed (somewhat justifiably) film legend bribes his son to document his death under the unquestioning assumption that it will be historically important. The Result In Memory of My Father, a twisted celebration of a Hollywood family narcissistically dealing with an eventfully frustrating day, regardless of the subtly distracting centerpiece which they’re forced to endure Dad’s corpse. With the tinted tonality of Six Feet Under, and the inappropriate wit of Curb Your Enthusiasm, Writer/Director/Actor Christopher Jaymes steers us through Dad’s wake, alongside his two brothers and Dad’s fickle twenty-something girlfriend. A 2006 festival favorite and winner of multiple awards including Best Picture at CineVegas & Santa Barbara FF, it boasts a top-notch ensemble cast and a superb soundtrack by indie veterans Belle & Sebastian.