02 Nov In Memory of My Father – Review 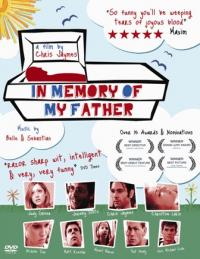 FlixFling contributor Rebecca Raymer reviews In Memory of My Father:

In Memory of My Father is a captivating film released in 2005, and directed and written by Christopher Jaymes, who also stars in the movie. Judy Greer, Jeremy Sisto, Matt Keeslar, and Nicholle Tom are only a few of the extremely gifted stars of this film – each actor brings impressive depth and passion to their role.

The brightest star of this show is Christopher Jaymes, the writer, director and actor. His willingness to be vulnerable in each aspect of the film has culminated into a funny, uncomfortable, heartbreaking, and never boring depiction of three sons with serious daddy issues (as highlighted by singing “Daddy’s Dead” at their father’s wake). It is effortless to imagine Jaymes’ personal stake in the story and the film – the genuineness of the entire work reveals very personal moments and emotions that are not easily captured by someone who has not experienced them in reality.

The musical group Belle and Sebastian contributes the very large majority of the music that plays in nearly every scene. The soundtrack brilliantly softens the harsh depictions of realities that would otherwise be too sharp to watch. In this way, Jaymes has implemented his unique version of the elements that have come to define other writer/directors, such as Wes Anderson (Bottle Rocket [1996, Columbia Picture Corp.], Rushmore [1998, American Empirical Pictures], The Royal Tenenbaums [2001, Touchstone], et. al.).

In many ways, In Memory of My Father tells an all-too-common and ugly story via a rarely achieved and divine work of film.

Click here to watch In Memory of My Father NOW on FlixFling!