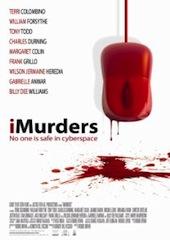 From the producers of the cult hit, Jerome Bixby’s The Man From Earth, comes a horror thriller that will have you on the edge of your seat until the very end. When the members of an online social networking website are brutally murdered in succession, one person’s past holds the key to the gruesome mystery. As the number of survivors decreases, they begin to believe that the killer might be one of the group. iMurders features an all-star cast including Tony Todd (CANDYMAN, THE ROCK), Terri Colombino (AS THE WORLD TURNS), two time Academy-Award-nominee Charles Durning (O BROTHER WHERE ART THOU), William Forsythe (88 MINUTES, THE DEVIL’S REJECTS), Gabrielle Anwar (SCENT OF A WOMAN, BURN NOTICE), Frank Grillo (PRISON BREAK, EDGES OF DARKNESS), Wilson Jermaine Heredia (RENT, FLAWLESS), Billy Dee Williams (FANBOYS, THE EMPIRE STRIKES BACK), Margaret Colin (INDEPENDENCE DAY, GOSSIP GIRL), and Joanne Baron (SPIDER-MAN 2, SCHOOL OF SCOUNDRELS), in this suspenseful, award-winning thriller where everyone is a suspect… until they get murdered. No one is safe in cyberspace!