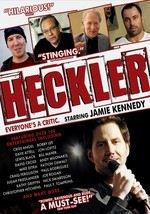 FlixFling guest reviewer Rebecca Raymer proves that everybody hurts (even comedians) in her review of Jamie Kennedy’s Heckler:

Comedian Jamie Kennedy went on a mission to confront hecklers and critics, and asks them on camera why they are so gratuitously mean to performers. Heckler (2007) documents his journey in an eye-opening and insightful composition of stars revealing their vulnerability as human beings with feelings.

Developing the status of a successful comedian in the United States is excruciating, but thousands of men and women relentlessly subject themselves to that pain and suffering over the span of years, and even decades, because it is THAT important to make people laugh. Seriously.

Some may argue that putting yourself out there is an invitation to be judged, and that trying to garner empathy for people who are richer and more successful than most is a ridiculous task, offensive in itself. Even if this is true, though, is it really relevant to the question, “why are people so mean?”

Heckler illustrates that cruel words, regardless of how little the heckler or how big the star, can really, actually hurt. But this film also documents the thoughts and perspectives of others who have had to deal with hecklers, and prompts a very relevant philosophical and psychological discussion about why people – any people – choose to be mean to someone else.

George Lucas, Carrie Fisher, and Henry Winkler are only a few of the very well-known people who contribute to this journey of growth and introspection that viewers may find applicable to their own lives. Regardless of age, socioeconomic status, preferences in entertainment, or life experiences, anyone can take away a sage tidbit from Jamie Kennedy’s film to make their lives and the lives of others a little more enjoyable.

Read more about this