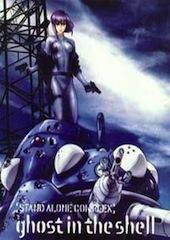 “Reversal” – A tactical nuclear device has been discovered in the Kyushu Telecom Tower in the Japanese capital of Fukuoka and some 35 million citizens are subsequently evacuated over a five-day period to allow the Ground Self Defense Army to safely diffuse and remove the device. The assumed culprits behind the bomb are militant refugees, but Section 9 thinks otherwise, and with the Prime Minister’s permission, enter into the hot zone to investigate the bomb first-hand.