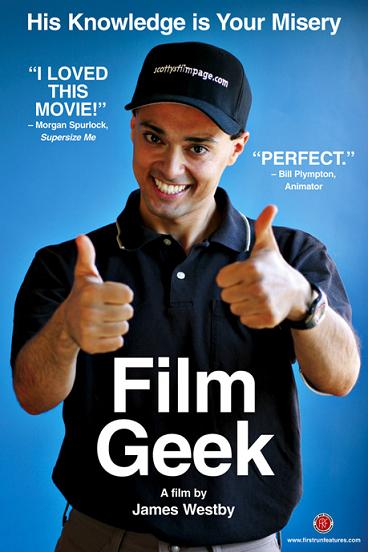 Film Geek (2005) is a movie written and directed by James Westby, and starring Melik Malkasian. Scotty Pelk (Malkasian) is a socially inhibited walking encyclopedia of all things film. His inability to read and interpret social cues combined with his compulsive chatter about films makes it difficult for him to get along in the typical world. However, his inherent decency and savant-like ability to recall information ultimately lift him to a position of envy and admiration.

Reminiscent of Napoleon Dynamite (2004, Fox Searchlight), Film Geek portrays an individual most would believe unlikely to succeed in American culture and society. Unlike Napoleon Dynamite, however, Film Geek has infused the protagonist with multi-dimensional character and expression. The motive to cheer for Scotty Pelk is visibly present right on the surface of this story, and does not require retrospection and time to evolve into utter endearment.

Anyone on the Autism spectrum – and anyone who knows and loves someone on the Autism spectrum – will find joy and peace in the hope Scotty Pelk brings to light. Misunderstood and unaccepted individuals can find an empowering voice in this character, and in this story. Film Geek transcends the limitations of social ineptitude, and provides a rare example of how love and tolerance can triumph over judgmental adversity.

Film Geek practically forces the conclusion that James Westby has mastered a harrowing balance of creativity, emotional intellect, and directorial execution. Melik Malkasian is fantastic in his role of Scotty: the actor’s fearlessness, sincerity, and talent shine brilliantly in this film. Westby and Malkasian are both gifted artists and entertainers whose career progressions warrant a close eye from audiences and critics alike.

Click here watch Film Geek now on FlixFling.  Rate the film and write your own review.