Posted at 16:30h in FlixFling, Movies by FlixFling
0 Likes
Share 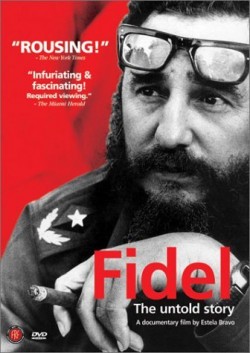 Whether dismissed as a relic or revered as a savior, many agree that Fidel Castro is one of the most influential and controversial figures of our time. Rarely are Americans given a chance to see inside the world of this socialist leader. The documentary Fidel offers a unique opportunity to view the man through exclusive interviews with Castro himself, historians, public figures and close friends, with rare footage from the Cuban State archives. Alice Walker, Harry Belafonte, and Sydney Pollack discuss Fidel as a person, while former and current US government figures including Arthur Schlesinger, Ramsey Clark, Wayne Smith, Congressman Charles Rangel and a former CIA agent offer political and historical perspectives on Castro and the long-standing US embargo against Cuba. Family members and close friends, including Nobel Prize-winning author Gabriel Garcia Marquez, offer a window into his rarely seen personal life. Bravo’s camera captures Fidel Castro swimming with bodyguards, visiting his childhood home and school, joking with Nelson Mandela, Ted Turner and Muhammad Ali, meeting Elian Gonzalez, and celebrating his birthday with members of the Buena Vista Social Club. Juxtaposing the personal anecdotal with history of the Cuban revolution and the fight to survive the post-Soviet period, Fidel tells a previously untold story and presents a new view of this compelling figure.

Read a review of this documentary