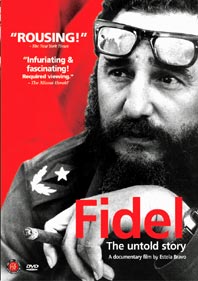 Estela Bravo directs this 2001 documentary of Fidel Castro’s life and politics. The film is comprised largely of footage of Castro himself, as well as the opinions and impressions of a variety of noted individuals, such as Harry Belafonte, Alice Walker, and Muhammad Ali.

Contrary to the American-held view of Castro as a despotic madman, Fidel frames him as a humanistic intellectual driven to achieve social justice in Cuba, and eventually in the world. A passionate and charismatic speaker, Castro stirs up revolution against corruption and inequality everywhere he goes. Along with Che Guevara, he fights to diminish the gap between socioeconomic extremes, and to improve the lives of millions of people.

Fidel is a fantastic example of why feelings toward Castro are so divisive. He has historically been presented to the people of the United States as an evil, communist murderer who hates freedom. However, this film exposes the very literal dismantling of U.S. interests in Cuba, which had at one time been a playground for mobsters and monetarily elite Americans. Castro defied the United States’ power and money, and reclaimed a tremendously valuable piece of the planet for his own people.

Castro’s heavy emphasis on education, medical access, and cultural arts make it difficult to maintain his reputation as the unfeeling tyrant he is known to be in the United States. The credibility of the United States’ definitions of Castro are weakened significantly by the USA’s eagerness to back violent and murderous dictators such as Batiste in Cuba, and Pinochet in Chile, in an effort to topple Castro and his influence. Fidel exposes the United States of America as a bully nation that is motivated not by freedom and liberty, but by indignant bad sportsmanship.

Fidel Castro has always been a highly controversial individual, but as this film notes, regardless of whether people hate him or love him, there simply is no way to deny his permanent and significant global impact.

How would you rate Fidel?  Click here to watch, rate and write a review of your own on FlixFling.