Posted at 15:31h in Movies by FlixFling
0 Likes
Share 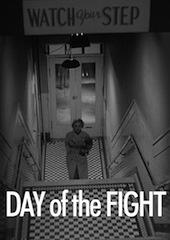 Click here to watch Day of The Fight now

Based on Kubrick’s pictorial for Look Magazine (January 18, 1949) entitled “Prizefighter,” “Day Of The Fight” tells of a day in the life of a middleweight Irish boxer named Walter Cartier, particularly the day of his bout with black middleweight Bobby James. This 16-minute short opens with a short (about 4 minutes) study of boxing’s history, narrated by veteran newscaster Douglas Edwards in a no-nonsense, noir tone of voice. After this, we follow Walter (and his twin brother Vincent) through his day as he prepares for his 10:00 P.M. bout. After eating breakfast, going to early mass and eating lunch, he starts arranging his things for the fight at 4:00 P.M. By 8:00, he is waiting in his dressing room, where he undergoes a mental transformation, turning into the fighting machine the crowd clamors for. At 10:00, he faces James, and soon, he comes out victorious in a short match which was filmed live on April 17th, 1950.