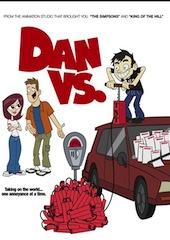 “Reality TV” – Humiliated after being tricked into appearing on a popular TV dating show, Dan sets his sights on destroying that most heinous of pop cultural fads – reality television! But when a slimy Hollywood TV producer decides that angry, opinionated Dan makes for “great TV,” he manipulates our little revenge-seeker into appearing on yet ANOTHER reality show and sets him up to fail miserably. But this time Dan is not taking it lying down and his revenge plot takes on a new life. Not only will he destroy reality TV itself, but he will also win the top prize and personally reap the glorious benefits!