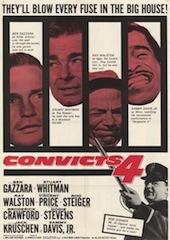 This movie is about the progression of John Resko’s (Ben Gazzara) character as he is commuted from the death sentence for killing a man to life in prison. Not only is he transferred to a new facility, but his guard (Stuart Whitman), who believes that man can be rehabilitated, has requested a transfer from death row. They end up in the same prison, and over the next 18 years, John deals with his lot through attempts at escape. He has a talent for art, and the guard seeks to encourage John to continue his drawing, as much to help himself rise as to do John a good turn. The guard creates classes for writing and drawing with the expectation that the prisoners work will show the council their progression toward rehabilitation. John resists his talent at first, and only sees it as another potential avenue to release himself. After he has had his art shown outside the prison walls, petitions come in for his return to society, even from the wife and children of the man whose life he took. The outside world is a constant theme throughout the years, and John catches glimpses of it from infrequent family visits. During all this, the audience also follows the rise of the guard to Principal Keeper. Both men realize their goals as John one day walks out a free man, and rejoins his now adult daughter and her family.