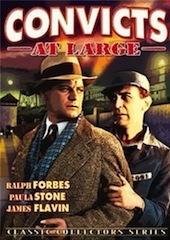 A bizarre case of mistaken identity unfolds in the 1938 crime-drama CONVICTS AT LARGE. When an innocent man is assaulted and knocked unconscious by an escaped convict, he wakes up without any clothes on. Finding a bag full of the convict’s clothes, he puts them on, then seeks solace in the darkened surroundings of a seedy nightclub. But on entering, he is mistaken for the escaped criminal by some people who demand to know the location of some stolen diamonds, leading to frantic protestations from the innocent man–who faces death if he can’t prove his real identity.