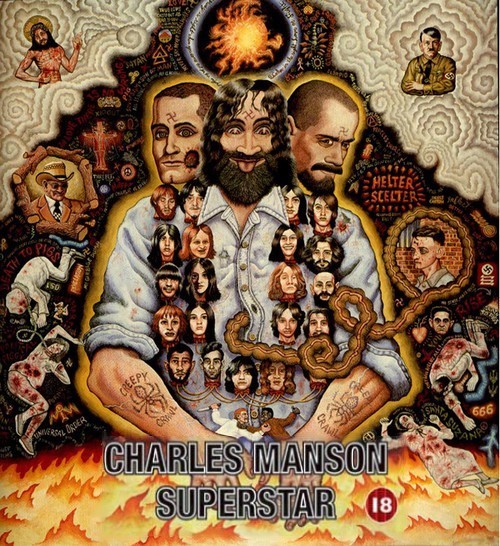 This 1989 sycophantic portrayal of Charles Manson (written, directed, and narrated by Nikolas Schreck ) attempts to “deprogram” the American people of its media-fed beliefs that Charles Manson is an evil lunatic.

It does not succeed.

Endless in-person ramblings of Manson from his home at San Quentin Prison are interspersed with obnoxiously extended stills of objects or areas Manson at one time touched. The music backing up the documentary is very poor quality, and primarily performed by musical groups having the word “Satan” included in their band name. An attempt at invoking a reverence of the man and the legend, Shrenk succeeds only in enhancing the already-popular view that Manson is dangerous and bat-shit crazy.

Schreck himself comes off as someone who also experiences a different reality from the rest of the world, awkwardly implementing and mispronouncing words he attained via his word-processing program’s thesaurus. Schreck attempts to clarify what he apparently believes are significant and celestial connections between Manson and other people or things that are not necessarily identified or real. This mindset unites Schreck and Manson in their easily identifiable characteristics of paranoid schizophrenics.

Between Manson’s incredibly annoying diatribes and Schreck’s incredibly annoying narrations, Charles Manson: Superstar fails utterly to do anything but add to the nonsensical and illogical manifestations of Manson, his “family”,  and his involvement in the gruesome murder of Sharon Tate and her unborn child.

Watch Charles Manson: Superstar streaming instantly on FlixFling.  Click here to watch now! Give your rating and review of this film on its movie page.