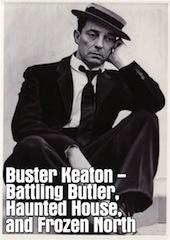 Battling Butler – A love-struck weakling must pretend to be boxer in order to gain respect from the family of the girl he loves.

The Haunted House – Buster is a bank clerk. Overturned glue gets everything, mostly the money, stuck to everything else. When robbers show up he can’t “”stick ’em up”” because his hands are stuck in his pockets. The robbers’ hideout is a haunted house designed to scare off police.

The Frozen North – This satirical parody of William S. Hart’s melodramatic films finds Buster in the frozen north, “last stop on the subway.” He uses a wanted poster as his partner in robbing a gambling house. When he thinks he spies his wife making love to another man he shoots them both only to learn it isn’t his cabin after all.