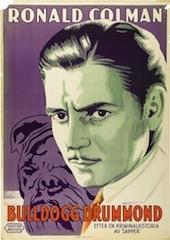 Nominated for 2 Oscars! Hugh ‘Bulldog’ Drummond is a British WWI veteran who longs for some excitement after he returns to the humdrum existence of civilian life. He gets what he’s looking for when a girl requests his help in freeing her uncle from a nursing home. She believes the home is just a front and that her uncle is really being held captive while the culprits try to extort his fortune from him.