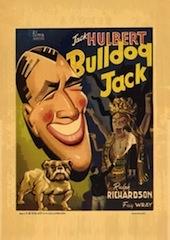 Bulldog Drummond is injured when his sabotaged car crashes and Jack Pennington agrees to masquerade as the sleuth. He is enlisted to help Ann Manders find her jeweler grandfather who has been kidnapped by a gang of crooks who want him to copy a valuable necklace they want to steal. Their plan backfires in the British Museum and the film climaxes in an exciting chase on a runaway train in the London Underground.