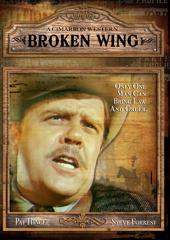 There is trouble in Cimarron when Jing McQueen, the drunken son of wealthy cattleman Mike McQueen shoots a local preacher and burns down a livery stable. When the preacher recovers, he refuses to press charges, and McQueen is released from jail. As anger levels rise and the people of Cimarron demand justice, Marshal Crown is faced with the task of having to control the lynch fevered mob.