30 May Below the Deadline

Posted at 13:26h in Movies by FlixFling
0 Likes
Share 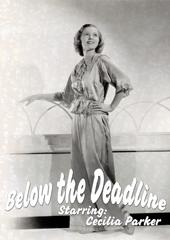 Molly Fitzgerald, who works for Abrams and Co. Jewelers, is accosted on the street by a stranger who asks her for a date, but her fiance, police officer Terry Mulvaney chases him away. Spike, the stranger, is interested in Molly other than for her pretty face; he is a member of a gang of jewel thieves who are planning to rob Abrams and want to use her to obtain information regarding the merchant’s shipments of jewels. Through another ruse, gang member Flash Ackroyd gets the information and through careful planning, frames Terry for the robbery. One of Abrams’ assistants is killed and Terry is charged with robbery and murder. Terry escapes but Molly is fired as Abrams thinks she was in on the robbery. Molly gets a job in a nightclub ran by the gangsters. The train on which Terry is escaping is wrecked and he is transported to a hospital more dead than alive.